You Are Here: Exchange Concert with ČVUT Prague University Orchestra 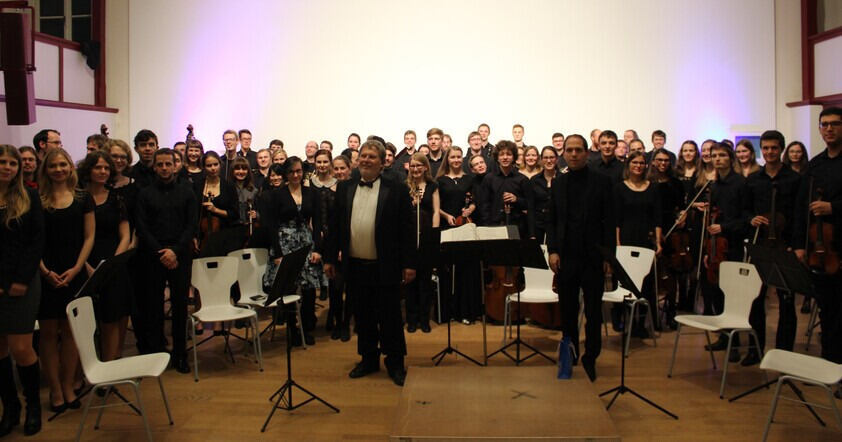 Another highlight of our year was the return visit of the Prague University Orchestra to Aachen. After some members of the Collegium Musicum University Orchestra had stayed in Prague last year and played a concert together with the Prague Orchestra, we were now able to welcome the Prague musicians and have a joint concert with them on November 25, 2017. In Prague we had been welcomed with open arms, so we all looked forward to the return visit and were excited to welcome the Prague musicians just as warmly. The concert took place at the RWTH Couvenhalle, which ended up being filled to the last seat. As a special guest, the Collegium Musicum welcomed the Rector of ČVUT Prague and the organizers of the Prague Cultural Association, particularly the Blazek couple, as well as the Rector of RWTH Aachen University, Professor Ernst Schmachtenberg. The Prague musicians offered a very varied program, the highlight of which was certainly the Clarinet Solo Concerto. Collegium Musicum played two movements from Dvořáks Symphony No. 8, already a part of the current program of the 2017/18 winter semester. The concert was rounded off by the greetings of the two rectors and a short speech by Ms Blazek, who praised the exchange partnership of the two universities on a musical level. There was also a lot of positive feedback from the audience. Even though the visit was very short, there was enough time, first at lunch and then at the self-organized buffet after the concert, to exchange ideas, socialize and celebrate the successful evening.

For us at Collegium Musicum this exchange was something quite special, because there hadn't been an orchestra exchange for a long time. Also, in collaboration with the Prague University Orchestra, it was implemented by the orchestra itself.